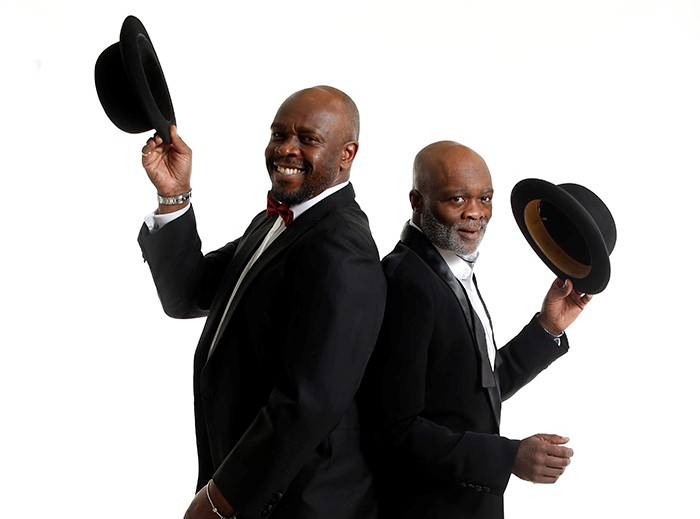 Eddie and Robbie have been working as a double act for more than 30 years.  The partnership started when Eddie was hosting a show and Robbie was in the audience heckling him.

They have hosted numerous comedy shows, awards ceremonies, weddings and parties over the years.  They started their own company GeeStor Productions with producer Sarah Moore and have produced over 100 shows and dances together including Mr SeXrated, Zim Zimma Come Sing For Yu Dinna, Back In The Day and Britain’s best gameshow A Wha Me A Go Win?

The feedback from the capacity audience at the West Yorkshire Playhouse for the Leeds Carnival King & Queen Show 2014 has been beyond positive. Central to the critical acclaim and success of the event in its first showing at this prestigious venue (and to new audiences) was the brilliant hosting by Eddie Nestor and Robbie Gee. Their perfect balance of rollickingly good humour, stage presence, timing, professionalism and above all their obvious chemistry was quite simply flawless. We look forward to working with them both very soon.   –Susan Pitter, Producer, Leeds Carnival King & Queen Show 2014

Robbie Gee has been starring in films and TV series for the past 30 years and is now one of the country’s most recognisable faces.

He is best known for his comedy roles in TV series like Desmond’s, The Real McCoy, The Crouches and EastEnders. Robbie’s numerous film roles include Snatch, Pirates Of The Caribbean, Underworld,  Dead Man Running (alongside 50 Cent), Cuffs.

Robbie is a founding member of GeeStor and along with Eddie Nestor makes up one half of the comedy circuits most in demand and enduring partnerships.

Together they have written for TV, travelled and worked in places as varied as Jamaica and Spain and hosted some of the biggest and most prestigious music and social events in the country.

Robbie and Eddie compere, play music, perform comedy sketches and their hugely successful gameshow A Wha Me A Go Win? Is still selling out to audiences around the UK 15 years after it started.

Robbie believes passionately in charity and as well as hosting the GeeStor Annual Fun Day Summer Scorch, mentoring for the Rudolph Walker InterSchool Drama Awards and hosting the annual sell out show in aid of Kwahu Tafo in Ghana at the Hackney Empire, Robbie also spends every Christmas morning serving in a soup kitchen, something he says reminds him of how lucky he is.  He recently took part in GeeStor’s epic fundraising journey Silimanjaro, Eddie & Lisa Nestor, Dave McQueen and Sarah Moore climbed Kilimanjaro in aid of 4 charities, sadly after eating too many McDonalds Robbie was unable to take part in the actual climb but made a massive contribution in helping to raise £40,000 for four charities.

Robbie is a mad football enthusiast having performed in films like Mike Bassett England Manager, Mean Machine and Channel 4’s The Manageress.  He recently starred in both series of The Frankenstein Chronicles with Sean Bean on ITV Encore and in British hit movie Paddington 2.

He is a qualified football coach and regularly coaches for Arsenal around the world.

Eddie Nestor is extremely versatile and is a talented actor, broadcaster, comedian and MC. As an actor Eddie made his name in series like Casualty and the Real McCoy.  He was a founding member of The Posse and co-wrote and starred in 3 successful plays alongside Robbie Gee; Gulp Fiction, The Nutty Professionals and The Oddest Couple.  After hosting his own radio show on Choice FM Eddie was headhunted by BBC London and now hosts one of London’s biggest news shows for the BBC.

His Drivetime show on BBC London 94.9 has won numerous awards including the coveted Speech Broadcaster of the year at the Sony Radio awards in 2007.

Along with Robbie Gee and Sarah Moore, Eddie started GeeStor to entertain and to inform. Together they have been putting on shows such as A Wha Me A Go Win? And bringing through new talent for more than two decades.  Eddie and Robbie have hosted shows around the UK and abroad for many years and also MC weddings, award ceremonies and other ceremonial events. Eddie supports numerous charities and as well as numerous charity gigs with GeeStor, Eddie has run the London marathon in support of the ACLT. In July 2015 he climbed Mount Kilimanjaro for ACLT, Rudolph Walker Foundation, Macmillan Cancer Support & Urban Synergy.